This is the home stretch. Runaway Ambulance! performs its first sketch comedy show ever tonight. We hope to have an audience of around 300 people. Getting here has taken seventeen members two months. The hours of effort will culminate in one forty-five-minute presentation. Are you nervous? I am. 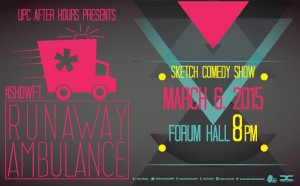 The most daunting and exciting part of this process has come in this last week. Everything has been theory up until now. As a writer, you form an idea. You trim and tweak to create a tight final product. However, everything can change as you translate words to the stage. We’ve added entirely new dimensions to characters this week as we prepare for tonight. We’ve changed the show order, the music, the final scene. It feels a bit like driving a sedan after practicing with the remote control version.

With only ten hours of rehearsal time in the performance venue, our tech crew has done an incredible job developing cues and a schedule — another component of the writing that I had not considered. We should probably have a crew of nine for the show we want to produce. We have five. They joined the project on Sunday and have shown a tremendous amount of dedication.

When I think of writing for a sketch comedy show I imagine developing an idea into a premise and writing some dialogue that hopefully turns into jokes. We have had to develop a show book that includes a comprehensive list of microphone changes, light cues, and a media schedule. This is where creative and technical writing meet. It damages my pride only slightly to admit that my English teachers in the past were right. Using different styles of writing is important. 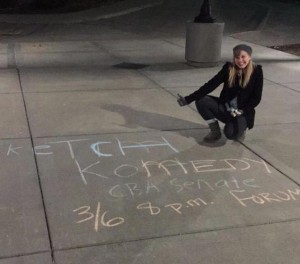 The writing doesn’t stop at the stage either. Another interesting fusion we’ve taken on as a group is creative writing and vandalism. Some members of Runaway Ambulance! decided to repurpose the political campaign chalking around campus. Don’t worry, the elections ended Wednesday and we needed the advertising space.

I’m thrilled to finally unveil our show this evening. Hopefully the audience will be massive, the laughs will be numerous, and the compliments will be overwhelming. But if not, that’s okay too. Two months ago we set out to try — to see if it could even be done. We’re here. I’m happy. We’ll see you tonight in Forum Hall. 8PM. Don’t be late.