The events taking place in Baltimore garner attention for obvious reasons. The instances of police brutality undeniably have been at the forefront of national conversation for the better part of a year now. Just as it did in Ferguson, public response has raised questions and commentary from those participating and those thousands of miles away. The wrinkles formed by the duality of protesting and rioting are being ironed out with the blunt instrument of point-of-view. Through all of the commotion, an interesting phenomenon is occurring at the ground level, and it’s all thanks to social media. 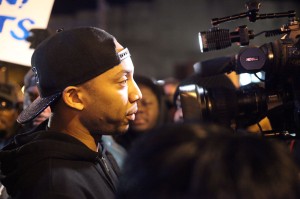 For the first time in the case of a large-scale American public protest, it feels as though the people are shaping the narrative as much as major media outlets. Citizen journalism is a powerful tool that gives each member of the public the ability to contribute to the news-gathering process. I remember hearing frequently that, “the mainstream media won’t show you this part of Ferguson.” The coverage centered largely on rioting and looting. Viewers are more skeptical this time around. Citizens levied the critique of imbalanced coverage in Baltimore before the big boys’ planes even touched down. And it worked.

I do not watch cable news broadcasts, I get my news largely from Twitter, Facebook, and an occasional perusal through a Google search. Of course social media can be less reliable in terms of source credibility, but when it comes to journalism — especially the sprawling variety required here — where do you place your faith? Why discount a twenty-second video shot by an individual on the streets of Baltimore? There’s no editing. No commentary. For all of the integrity and the training, reporters working for major media outlets answer to bosses who answer to ratings. The goal in every case is to remain profitable.

I don’t mean to cast mainstream media in a strictly negative light. This isn’t easy. For ideal coverage of this story you would need a fleet of reporters living day-to-day in Baltimore with a variety of socio-economic backgrounds and deep ties to the community. That’s not feasible. Instead you have untrained witnesses. I argue that the lack of training increases their credibility. The content I’m seeing shared across my social media platforms is not from Fox News or CNN, it’s from people with smart phones who saw something interesting.