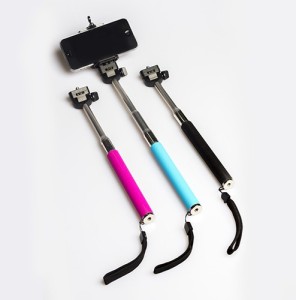 Selfies. Ugh. They are seriously one of the worst trends that’s ever gone mainstream. People taking boring photos of themselves and posting them multiple times per day. Just because they can. But now (actually a few years ago), that trend has gone a step further with the selfie stick. A device that helps achieve a more efficient selfie and the capability to snap from a further angle.

What’s worse is that the product was invented because of a need. People were taking so many pictures of themselves that they needed a better way of obtaining self portraits. Which is also why it’s been dubbed the “narcisstick,” a play on words describing the product perfectly. It glorifies vein boredom.

Not only are selfie sticks a thing that exists (which I’m still not over, BTW) – where pictures are taken whether or not they feature anything cool – it’s one that people have embraced. Become obsessed with, even. Back when the device was first released, it was as hard to come by as a Tickle-Me-Elmo circa 1996. People were buying them that quickly. Manufacturers have since filled that need, and then some. They’re affordable, easily found, and user-friendly. Folks can continue snapping away photos of themselves for all hours of the day. Wednesday lunch and a ponytail? Time for a selfie, they say. What about walking to get the mail? Yep, selfie. How else would you have proof how your face looked that day? Or that lips could pout out into that specific direction?

Yes, the selfie sticks are keeping track of history. One mundane moment at a time.

The History of Selfies

The concept of self portraits has been around for years. Painters created their own images, letting the world know how they looked as well as all of their other paying customers. But even Van Gogh knew he needed to spice things up. Seeing how boring these self-portraits had become, he chopped off his ear to create a selfie we would remember for years.

Next came the camera. Professional photographers would stand in front of their own lenses and press a bulby button (which was attached by a cord). That is, until years later, when a camera could be easily held, and folks would turn their Polaroids. And hope they fully captured their own face. Minutes afterwards (or weeks when dealing with film) the truth would actually be known.

Then we all got phones with cameras. Then phones with better cameras. And somewhere along the line, everyone started becoming obsessed with their own face. They took photo after photo, generally while making different facial expressions or creating some type of pose. But you were also limited to the reach of your own arms.

Until someone invented the selfie stick, making the process far easier and frequent. 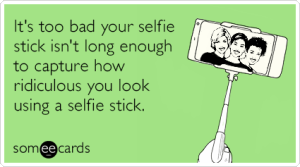 With the available technology, it’s easy to take self-photos. In addition to the selfie stick, there are cameras that turn focus with the press of a button, apps with filters and features, all while posting directly to social media. Quick and easy.

Yet there’s a downside, too. For one, there is an incredible focus on self image. People feel pressured to take photos of themselves, and to share on a regular basis. Or at the very least, are told it’s ok. We are a society of tooting one’s own horn.

Then there are those who are so focused on photos, they lose track of reality. Even to the point of putting oneself in danger.

Some Other Selfie Stick Facts:

There’s no denying that the selfie, and its subsequent stick, have made their waves among the population. But for the sanity (and safety) of us all, I say it’s time to move on. To realize there are better things in a day than taking pictures of ourselves. And that more often than not, of situations that simply aren’t photo-worthy. Instead, let’s start identifying which situations are actually redeemable, and which ones allow us to be too self-involved. Let’s get over ourselves, and our selfie sticks already; the time has come.