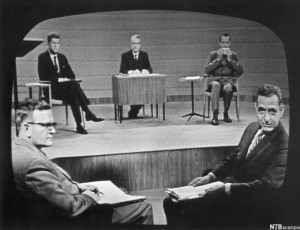 In 1960, television changed the course of American history. John Kennedy squared off with Richard Nixon in the country’s first ever televised debate. Kennedy’s sparkling youth cast a long shadow over the uncomfortable Nixon. Because of this new medium (and possibly some voter fraud), Kennedy won the election, becoming the youngest president ever elected to the office.

It’s easy to overlook the significance of television when you see ads for the latest season of Real Housewives or anything on HLN. However, every major advancement in the field of media (printing press, radio, Internet, etc.) has been responsible for wholesale historical change.

Social media finds itself in this impactful position at the moment. Perhaps platforms like Facebook and Twitter already deserve credit for the momentum generated by both of President Barack Obama’s campaigns. However, this time around, social media changes the landscape entirely.

Social media news is not trusted by users to the degree that news from traditional media platforms is, and rightfully so. I have maintained that the echo chambers and hyper-reactive culture encouraged by microblogs breeds sensationalism and inaccuracy. On the flip side, social media also facilitates niche-interest groups. It allows individuals to connect based on a common interest in a way that was previously unthinkable. These outlets have allowed one candidate in the coming presidential election to erupt in a way that his predecessors did not.

I am a young person, so I speak not with a viewer’s perspective, but with a first-person point of view. I can’t recall, in my life, young people being so excited about a candidate in a presidential election. The fact that the person they are excited about is a Doc Brown-esque 74-year-old man is even more improbable.

Social media has allowed veteran senator Bernie Sanders to become not only relevant, but prominent. I am a media skeptic. I also believe that most people are rational. Thirdly, I believe that rational people prefer honesty and direction. I won’t inject any statement about philosophy into this article. However, absent any political leaning, Bernie Sanders is an undeniably blunt, direct, and determined figure. He is the portrait of a politician. Even if you have a viewpoint that conflicts with the senator’s, surely you admire his presentation.

Senator Sanders’ candor and resolve have clearly struck a chord with the young, often-unengaged eligible voter demographic in a way that forerunning Independents like Ross Perot could not. I attribute this momentum to social media platforms.

They allow users to shape their own narrative. Senator Sanders would have likely been ignored by traditional media from the start. And he has been, arguably.

In true new media fashion, I make these assertions before the democratic party debates have even begun. This entire conversation starts more than a calendar year before the election itself. Ultimately we cannot say whether social media will be the 2016 equivalent of television. But modern media is a sticky, fat-dense arena. It’s butter. Honesty makes for a hot knife.