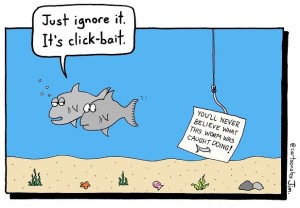 Almost every time I log into Facebook, there’s an article about something big and bad that’s taken place. Maybe it’s about something big and good, like someone being cured of cancer. Either way, it’s a topic that’s dramatic and borderline unbelievable – written to gain clicks, not necessarily to inform the reader. Of course there are the rare mediums that have actually done their research and provided fact-checked information. But for the most part, there are titles full of lofty claims with zero-to-little information baking them up. Opinions are blatantly thrown into the writing. And there’s nothing more to the story than the original title – which may or may not have proven itself to be true.

These types of articles are called click bait, and they’ve all but taken over Facebook. Users are encouraged to share things as often as possible. (in some cases, articles can’t even be read until they’re shared; if that’s not proof a story is sensationalized, I don’t know what is.) Which, in turn, blows up our newsfeeds, and essentially gets us riled up about non-issues.

These title writers, they know their stuff. They’ll pose the words to be as intriguing as possible, luring you in, and getting folks to believe in an issue without any facts. (And because it’s the Internet, anything can be posted.) “It was on Facebook, it must be true,” we tell ourselves. When, in reality, these stories are about getting us excited enough for whatever website posted it to gain exposure.

Click bait articles is a trend that’s been gaining steam for the last few years, and I say it’s high time we put an end to it. If we, as a group, say, “We’re not falling for it, guys,” and stop sharing. Stop overreacting to events that hold no clout. Stop starting conversations with, “I saw this thing on Facebook,” and simply stop giving their exaggerations fuel.

Think how clean our newsfeeds would be! How less angry we could be throughout the day. It may be a lofty dream, but it’s one worth having. Newsfeeds that are filled with actual news.