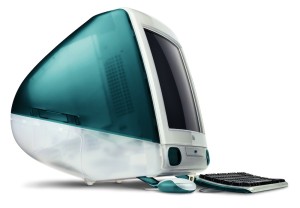 I had an iMac with the blue shell on the outside.

After serving as the family computer for a number of years, I was allowed to house this machine on my personal desk. It ran slowly, taking eight minutes on average to boot up. It could browse the Internet, sort of. It didn’t feature a true word processor, but TextEdit allowed me to get by. Ultimately, at age 11, it was awesome to have my own computer.

My parents had moved on to the iMac model with a circular base and flexible arm attached to the screen. After that it would be a G5 tower, and then a new iMac. My dad runs a monitor hooked to an old macbook in the upstairs office. I’m typing this post on an iMac. Our entire family (my mom, dad, and two sisters) has iPhones, and a few iPads of ambiguous ownership float around the house every time I visit.

I’m not sure at what age I became an Apple apostle (If you combine the two to make App-postle it just sounds like someone who champions applications), but I retain a distinct brand loyalty in this department. Throughout my childhood, Dad trumpeted the evils executed by Microsoft — it would bully its way into a sector and operate at a loss for a number of years just to take a piece of the pie, a la the XBox. In retrospect this seems like a pretty standard business practice. Maybe Dad was just really into 1984.

Apple makes great products, or perhaps more accurately, it makes well-packaged products. That was Jobs’ whole thing: presentation. The phones, computers, and tablets all come in sleek, elegant casings. The brand is aesthetically pleasing while offering a combination of simplicity and functionality. It’s expensive, but it works. Usually.

My girlfriend bought an iMac from Best Buy in the fall of 2014. She didn’t buy AppleCare. A little over a year later, one month after the warranty had expired, her computer stopped working. The screen went black with thin green bars running across it. Best Buy took a look at it and concluded it wasn’t a display issue. Replacing the video card — the proposed solution — would cost two-thirds of machine’s original price. My girlfriend was in college and didn’t have $900 extra dollars. She sat on it for about a year.

I decided recently that I would deal with the computer. It had been taking up space in our apartment and I figured at least we could sell a refurbished version to someone who would appreciate it. I made an appointment and took it into an Apple Store. After forty minutes, the diagnosis was “new video card” (whaaaaaat?). After a week, a voice mail informed me that the new video card didn’t work and the new diagnosis was “new display” (the very procedure Dr. Best Buy had decided against). To figure out what the new price would be for the new plan, I called the number that had called me. It was an unassigned number. I then called the number Google associated with the store. I talked to two machines and was directed to an operator who then directed me to the store I thought I had called. I then talked to someone who directed me to someone else who told me the new plan would cost about $20 more than the old plan. I bailed.

The average Google star rating for Apple Stores in my area is 2.9. My thought process at this point is that if you cannot successfully diagnose the flaw in your product, then perhaps this is a sign of poor craftsmanship. And perhaps you should remedy the situation rather than pass the cost (monetary, time, effort) on to the consumer.

To make this more than just a whiny Facebook post, the disconnect between Apple’s customer service and the (usual) product quality is startling. Contrast it with Amazon’s customer service. Shopping with the online retail giant is awesome. You send a brief message saying you didn’t get your package or it was broken. Five minutes later you get a phone call back telling you your purchase has been fully refunded. Done.

Will I take a principled stance and quit all Apple products? I dunno, have you used a Dell laptop? They come pre-broken. When you’re offering the industry’s best product you don’t have to bend to the will of the people. I’m going to continue using my iMac and iPhone on a daily basis. However, I’m no longer the Appleyte (nailed it) that I was at age 11. Sorry Dad.