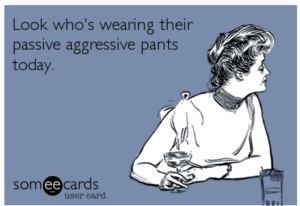 Do you regularly send emails with question marks at the end of non-question sentences? Do you respond without explaining yourself – or anything? Do you only address the points you wish to discuss, while avoiding the rest? If so, along with a few other key factors, you just might be a passive aggressive emailer. One of the worst forms of communicators, IMO.

Why? It’s a practice that places blame, creates controversy, and often causes more confusion than necessary. Besides, you’re typing, not texting – take three extra seconds to spell out what you’re trying to say. It will save everyone confusion in the long run, and therefore, time spent on a single email.

If you email saying, “I saw the blog on the front page?” it pretty much takes everything in me to not reach through my computer and slap your question-mark typing hand. Do you realize that isn’t a question? Do you also talk that way? Saying, “Oh but this?” with a rise at the end to show you’re questioning said statement? For me, it is the equivalent of nails on a chalkboard. Every time I see it I want to type back with, “Yep it’s there. Now did you have a question about it?” Or a similar response that accurately expresses my distaste.

Only that’s rude, just as rude as the non-question-asker’s non-question – it’s just a blatant form of rude. Aggressive-aggressive. Not one that hides behind inflection and a disregard for common decency. To show my understanding of social faux pas, however, I don’t say it.

Other signs: ignoring emails. Not from unsolicited messages – if we responded to every message we ever got, it would likely take years off our life. But when you know someone, or are dodging a conversation on purpose, or simply because you can’t be bothered, it’s another PA emailing move.

Ignoring requests or questions is another offender. If someone took the time to email you with a specific list, it was likely for a reason. That doesn’t mean you have all the answers, but it does mean you can take two seconds to explain you don’t know said answer, or that you need X amount of time to sort it all out. Leaving someone hanging is telling them that your time is more important than theirs, or that you simply don’t care about their requests. Yes, you might be busy; everyone is busy. But we all get the same 24 hours in a day, and one person’s timeline shouldn’t be delayed simply because of someone else.

If you’ve done any of the above – or all – it’s likely that you’re a passive aggressive emailer. Put yourself in the same situation, and rather than putting communication off, address the actual issue at hand. With flushed-out questions, and real meat behind the emails you send out.