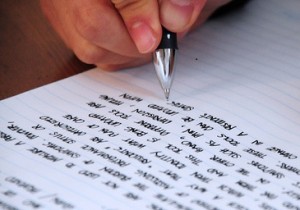 This weekend I helped a friend write her father’s obituary. He had been sick for some time and his death wasn’t so much of a surprise as it was a hardened reality. But that never makes the loss of a loved one any easier. It doesn’t make him less missed. Nor did it make writing about him in a few short paragraphs any easier for the family. So she called me and I listened to them talk – their stories, their intent, their wishes for the overall finished product. It wasn’t that I was more qualified or more experienced; it was my first obituary. It was that I was more removed from the situation. I was able to channel their grief in a way that they couldn’t immediately communicate.

There were still so many questions, though. How to properly format, how to include those who had already passed and those who were still alive. To my knowledge, Word doesn’t host an obituary template. Google provided some help, but with many altered versions, still causing us to cut and paste what looked or felt best. It was something that, despite 18ish years of writing in school, I’d never been taught. Would it be awkward to write an obituary out of the blue? And be graded on it? Probably. But less awkward than having to learn the hard way.

It also got me thinking about other things we’re never taught to write, like real estate listings, personal biographies, business plans, and especially emails. Unless you took specific courses (for instance, as a business major), chances are these weren’t learned in school. And it’s getting worse. This same friend as above had to teach her college interns how to address letters. At 18+ years old, they listed the town in front of the actual address, and had no idea what to do with the zip code. This is a skill I remember practicing over and over in elementary classes, by writing to Santa, class pen pals, grandparents, or whoever else we thought was deserving of a letter. It’s a skill that might be less common in today’s time, but still has a social need. How else are you going to invite folks to your wedding? Or birthday party? No, E-vites aren’t always the alternative.

The same goes of listing your house for sale, creating a succinct list of life accomplishments, or in everyday communication. Were these skills that were taught at one time, then eliminated to make way for something more current? And if so, what are the replacements? Because it certainly wasn’t how to correctly punctuate a Facebook message.

We might not all aspire to be professional writers, but that doesn’t mean there’s not a need for proper know-how, and some gentle experience along the way. That way when life throws us a need to write, we can respond with a well-researched piece. And the confidence to go with it.