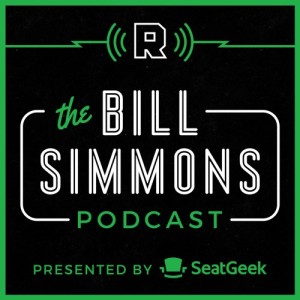 My college career included a fickle schedule. Each semester brought a different course lineup. Clubs, teaching, improv, friends, and bars kept me busy when I wasn’t in class. I was always busy, but I rarely had a routine.

Since graduation, I have settled into a more consistent schedule. I don’t have to commute 45 minutes to work each day like my girlfriend, but I have dedicated blocks of free time. Since bars are expensive here and my friends have full-time jobs, I have replaced my college hobbies with podcasts. According to SmartAsset, that makes me a typical young, educated male.

Pre-university, I had known about podcasts as a concept. I kept MP4s of my radio shows from KSDB for theoretical future use. I listened to some one-off pod episodes on plane rides, but I hadn’t yet sworn an oath (via subscription) to any of my current favorites. Now I have a steady rotation of podcasts that I consume on a weekly basis.

Beyond my entry into “the real world,” my podcast diet has grown because podcasting itself has grown. The tremendous popularity of Serial helped inject this medium into the mainstream. Year-over-year percentages for the number of people who listen to a podcast each month have increased steadily since 2008 (up to 17% from 9% in that time). And where the listenership goes, the advertising money is sure to follow.

“You won’t get rich podcasting.” Okay, sure, people won’t get rich partaking in most of the things they enjoy — that’s a major conceit of ‘having fun’ — but can one make a living off of podcasting? Participating in the medium has a fairly low startup cost. Microphones, a computer, and hosting services are relatively weak entry barriers when compared to price of cameras, lenses, and lighting equipment.

Advertising money continues to enter the podcasting arena, and crowdfunding models (like those used by public radio) help supplement expenses. By building a base of subscribers, producers can sell the idea of listenership to advertisers more easily. The cost per thousand impressions (CPM) is much lower for podcasts than for that of traditional media, and these advertising slots already feature specific audiences. By having podcast hosts read the ad copy, companies get to incorporate their message into the rhythm of the show, rather than give the listener a reason to search for something else.

Podcasts flow through the same vein as Netflix and Uber: they have the on-demandiness that modern users crave. The fidelity is higher. The ads are limited. The content is more substantial. That last attribute is important for me.

I enjoy following sports, but television coverage outside of the actual games has become unwatchable. Every segment is a lowest-common-denominator, 2-minute shouting match. Wild speculation and asinine arguments suit the pace of 24-hour coverage.

Podcasts are French salons by contrast. Thoughtful analysis takes the place of on-air aneurysms. Everyone can take their time. I can to listen to people I respect talk in a longform setting. I get substance. They’re like a 2500-word piece for the ears.

I started listening to The BS Report when Bill Simmons, my favorite sports writer, worked at ESPN. Zach Lowe, who covers the NBA wonderfully, wrote for Simmons’ website, so I started listening to his podcast too. I picked up recommendations from those two podcasts for other podcasts. The same chain-lightning effect happened for me on the entertainment side of things with Dan Harmon’s Harmontown. 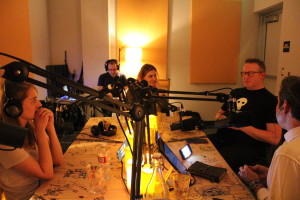 Just like perusing Netflix’s “suggested for you” tab, listening to podcasts begets listening to more podcasts. I consume them during car rides, workouts, and afternoons off. As you track a show for several weeks in a row, listening begins to feel like hanging out with a group of friends. Everyone loves friends.

As the advantages for both the listener and the advertiser coalesce, podcast popularity will continue to grow.

If you’re looking to dive into the world of podcast listenership, or just need some new recommendations, I’ve listed some of my favorites to get you started. (Note: I have a limited scope at the moment that encompasses mostly sports and entertainment.)

A fun improv podcast that features an interview with a guest followed by a winding narrative. Paul F. Tompkins hosts, and his ad readers make commercial breaks more fun than they have any right to be.

Hosted by Dan Harmon, the show features guest appearances, freestyle rapping, stammering, and a genuine, endearing honesty. Plus they usually do some D&D-style role playing during the last fifteen minutes of the show.

If you enjoy professional basketball, Zach Lowe has some of the best analytical writing on the market. He’s not quite as clean on the pod, but he takes a thoughtful approach, and his guests usually give great insight regarding the inner-workings of the NBA.

Since acrimoniously leaving ESPN a little over a year ago, Bill Simmons has started his own podcast network featuring a blend of sports and pop culture perspectives. Other BSPN favorites include The Watch (TV/Movies/Music) and Keeping it 1600 (a political podcast, which I never thought I would enjoy).

Two working screenwriters in Los Angeles talk about their craft and share details about the day-to-day activity of film industry professionals. It’s a fun peek behind the curtain if you’re interested in that area.

I started watching English football a couple years ago. I like playing the FIFA video games, and I can appreciate the athleticism and history, but I love the way English people talk about it. Commentators weave beautiful tapestries with their words when calling a match. This podcast features two sarcastic Brits (with a great report) recapping the weeks gone by in the English Premier League.

The Black List started as a place for aspiring screenwriters to showcase their works that weren’t being produced. Around a year ago, this podcast started generating readings of these passed-over scripts featuring famousish actors. They’re a great way to kill a couple hours waiting for car repairs or a layover.