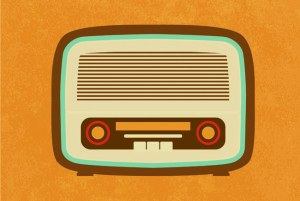 During the drive home from Fort Worth Tuesday night, we came to a complete stop on I-30. Some police vehicles were blocking the road, which had already been trimmed to one lane for construction. As we sat for 10 minutes, I flipped through the radio presets in search of some entertainment. The most interesting thing I heard was an advertisement.

I listen to the radio a lot now. My Pontiac Vibe doesn’t have a jack connection for my phone, so terrestrial broadcasts are my only option during trips around the city. I hear plenty of ridiculous ads and readers for local law firms and payday loan companies (imagine this but on the radio). The advertisement I heard on Tuesday didn’t stick out because of an over-the-top gimmick though.

It was an ad for Lyft, the ride-sharing service. Specifically, the copy highlighted all of the advantages that Lyft gave drivers contrasted with Uber’s platform. So this was a 4-year-old company that makes a smartphone application which allows users to call a civilian taxi, defending its merits against a competing app via the radio, a medium that has existed since the late 1800’s. I immediately imagined the reverse scenario in which AM stations were using promoted tweets and Facebook sidebar ads to bolster their listenership.

A passive diffusion is happening: older brands are advertising with new media, while tech companies enter the mainstream via traditional sources. Mobile games occupy the same television space as Budweiser and Ford, and the world’s biggest messaging apps are primed to monetize via marketing and customer service features.

Graphical representations like this one from Statista show the rapid growth in digital advertising spending. As more and more media consumption moves online, of course the advertising will follow. However, a Pew Research study from January of this year suggested that some consumers remain loyal to their particular medium. “Around half of newspaper readers only read in print,” reads one of the graphic headings. Those that only read the hard copy of the paper were also more likely to watch local TV news.

People have always appreciated localized content, and advertisers have always sought a direct channel to their targets. Thus, traditional media remain an important part of the advertising portfolio. Online media consumers are more likely to “graze” — declining loyalty to a specific news outlet.

In my experience, digital advertisements are more avant garde than traditional media spots. Specific campaigns appeal to specific audiences. On television, advertisements are typically formulated and well-produced. The radio is its own genre.

Radio spots are clunky and gimmick-heavy. Every Kansas City native knows Tom Shane, his voice, and his verbose descriptions of how his company ensures the quality of its jewelry. (“Only Shane Company jewelers deep sea dive off the coast of Shanghai to find precious Pacific SapphiresTM.”)

Being whacky helps you stand out. In fact, I’d like to see radio advertisements lean into this even more. It’s a weird landscape, let’s try some really weird stuff. How about a spot that sounds like someone has accidentally butt-dialed someone else? How about a serial radio ad that encourages people to listen to previous ads?

Radio is one of the oldest forms of mass media entertainment. It has survived television, the Internet, and streaming services. The pervasiveness of terrestrial broadcasts gives them an advantage in reach for local advertisers. That’s why dopey car salesman will always find a home on the airwaves.

I appreciate radio — ads and all. It helps pass the time during those inexplicable highway stops. I’m sure I’ll hear Uber’s rebuttal soon.