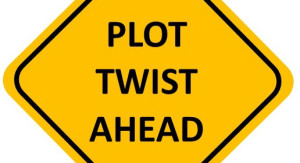 Acting is all about making a choice. You’ll hear directors and critics refer to a performer’s “choice” as being bold, or weak, or confusing. The words are on the page for the actor. It’s the way he or she chooses to interpret those words that dictates the performance. The relationship between writer and actor or director can sometimes become strained because the writer pens his or her words exactly as they should be delivered. Depending on the egos of the individuals involved, any deviation from the master plan can be interpreted as a criticism.

However, ultimately, writers have the same decisions facing them as performers. As a writer, you still get to make choices. Choosing to move boldly or in an unexpected way can totally change an audience’s perception of your story.

Our culture loves twists, craves them even. We anticipate them happening for the length of entire seasons, novels, and films. You can get lost in a portal while wading through Internet theories about prestige dramas like Game of Thrones. Who’s gonna die? Who’s who’s parent? We devour it. Audiences want to be surprised.

Not every surprise is about shock value. A changeup can be just as lethal as a curveball. Amidst a tension-filled science fiction thriller, the film Ex Machina finds time for a bizarre dance sequence (spoilerish) that injects humor and humanizes the borderline-unfamiliar situation. Ultimately it adds more weight to the film’s haunting conclusion.

When you make the atypical choice as a writer, it snaps the audience to attention. However, when it comes to writing, saying is always orders-of-magnitude-easier than doing.

When writing something for yourself, no matter how many words you key, you’ve always got a theoretical abyss before you. That’s a lot of blank space. I’ve mentioned writer’s block before, but I’m not referring to an absence of motivation now. Even when you’re in-rhythm, making pronounced choices isn’t a given.

A gear shift still needs to feel earned. You want your story or piece to satisfy the audience’s appetite for story, not necessarily its expectations. Emotional honesty for characters and the author is key. Honesty validates the unexpected choice. I learned that from improv.

Improvisation is all made up, just like writing. When improvising though, you cannot revise. That means you have to be clear and bold with your first draft. The audience will shriek with delight when it sees an interesting or unexpected choice. However, the moment you sell out your own character or the scene you’re in for a joke, the audience loses something. You can actually feel the souls withering in the theater.

I don’t suggest that writers should halt their own process to brainstorm ideas for wacky twists. You have to be true to your own style. However, if you have an impulse, follow it and commit to it. That’s a core tenant of improv, and an easy way to empower yourself as a writer. Don’t be afraid of the bold choice. The audience wants you to make it.