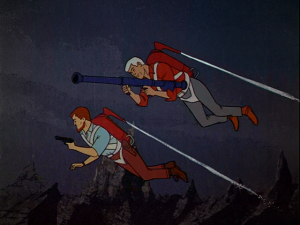 Our most captivating childhood renderings of the future always involved technology: self-driving cars, robot chefs, and space travel. As we get older, maybe we imagine prospective social progress or economic motility, but shiny chrome and talking computers will always hold a special place in our imaginations.

Personally, my favorite piece of future tech was the jetpack/hovercraft. How can you top a personal flying device? All the best characters — heroes and villains alike (IMAGINE SHOOTING A ROCKET LAUNCHER WHILE FLYING)— could soar through the air at will. I fantasized about wielding such a technology.

Eventually, I saw the world created by 60s cartoons as unrealistic. While The Jetsons may have actually used some plausible technology, they lived in the sky. Siri was on the horizon, but the lack of verisimilitude suspended my suspension of disbelief.

The thing is, we’re here. The equipment and laboratories used in Space 1999 were probably actually dated by the time we got to that year — albeit in a terrestrial setting. Technology has exploded, and some of the James-Bond-pipe-dream stuff that looked like a campy romp is becoming a reality.

Self-driving cars haven’t entered the mainstream, but think about how close we are. Most new luxury cars have brake assistance, steering assistance, and the ability to keep you in your lane. They’re also outfitted with cameras. The Society of Automotive Engineers indicates that according to its scale, most new vehicles are at a 2, or “partial automation.”

Think about the state of our cell phones a decade ago when this was considered cutting edge, and the ability to play music was as rare and elevated as a 1600s Englishman’s ability to read. We can’t be more than ten years from a mainstream tech boom in the auto industry, we’re actually already living it.

Companies like Google are pushing things along by developing a fully-automated model. Its design doesn’t even include a steering wheel or driver pedals. Kinda scary. That’s how we get somewhere, though. While traditional automakers slowly incorporate new technology into existing technology, players without an existing model can operate on the forefront.

The implications for self-driving vehicles are tremendous. Imagine riding the subway without being sandwiched between strangers. All transit time could become productive time. I could be writing this post on the way to a meeting (like I go to meetings). Partial automation is intended to reduce accidents and increase safety. With the millions of test miles being logged by self-driving cars, reliable technology is clearly important to the manufacturer. But there will be collisions, and that brings up another interesting implication: who’s at fault?

Do you blame the manufacturer of the car? The company who designed the software? The driver? The municipality? The Insurance Information Institute isn’t sure yet. According to the institute, most crashes are caused by human error, so theoretically incidents should go down as automation increases. However, the organization acknowledges that liability laws may change in the future to accommodate these cars. We don’t want to scare manufacturers out of progress, but someone will have to pay for the likely-increased cost of repairs, given the more sophisticated parts being incorporated.

Insurance ramifications were never the most exciting part of Jonny Quest episodes. (In fact, they were totally ignored.) The gadgets were. All complications aside, it’s cool that we’re even close to having self-driving cars. That idealistic view of the future doesn’t seem so farfetched. I may never get my jetpack, but who needs to fly when you’ve got an invisible chauffeur?