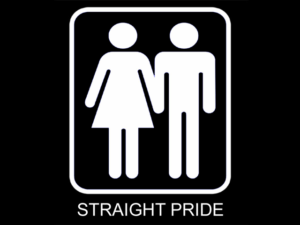 Is the Internet trolling itself with this trend?

Social media are home to acidic opinions, ready to melt the world around them. But what happened Wednesday morning felt like a nudge from an invisible hand. The question is worth asking.

The hashtag #heterosexualprideday appeared in 114K tweets by 7:15 AM, central time.

Heterosexual pride was a movement that largely took hold in the nineties as a counter to gay pride (see also: #AllLivesMatter).

A quick trend search for the topic reveals an avalanche of sarcastic quips. Memes, .gifs, and subreddit links all chip in to help the Twittersphere dismantle the farcical hashtag.

Trend perpetuation has happened before

During my research, the proponents of #heterosexualprideday were so few-and-far-between, that even the supporters seemed disingenuous. It reminded me of last year’s “Boycott Star Wars” campaign that had almost no legitimate backing. The trend survived on the outrage of those who were justifiably disgusted.

When there’s no one on the other side of an argument, yelling doesn’t necessarily accomplish anything.

By commenting on the movement using the movement’s hashtag, you spin the movement forward. Maybe your goal is to ridicule the trend for being tone-deaf, and you need the hashtag as evidence in your argument. Even so, that chess move will always be undercut by the inevitable slew of self-fulfilling tweets reading, “How is #heterosexualprideday a thing?”

In this case, I’m watching the trend develop live. I have a few good guesses as to where this thing originated, but unlike with the Star Wars incident, I don’t know. Which is why I have to ask, “Is the Internet trolling itself?”

Twitter has become one of the most widely consumed news sources in the world. It’s actively wrestling the mantle away from cable, so it seems only natural that it would eventually pull a cable news move. Using a straw man argument to fuel a 24-hour news cycle, that’s textbook. It’s also the reason I don’t watch CNN.

Heterosexual Pride Day is basically a “you up?” text from Twitter

Social mediaphiles have the ingenuity of a Japanese elementary school gym class. They’re always active. A halfway-serious proposal is all they need to invite themselves over for a three day stay.

Could Twitter be making things up to stir the pot? Is the type of rhetoric I just used part of the problem?

More likely, #heterosexualprideday is a prompt from a conservative group. But maybe a struggling biology student just got confused. Regardless of intent, the manipulation worked. The seed has taken hold. The trend towers over runners-up like #ThingsIWillAlwaysBe.

The resounding disapproval of Heterosexual Pride Day looks like a win for progress, but what’s the end goal? What’s the best-case scenario? After being thoroughly routed, all supporters of this polarizing stance have to change their banners to House Social Equality and swear fealty to Ru Paul?

The social media battlefield is not where opinions are altered.

Personally, I enjoy seeing ignorance struck down. The overwhelming “no” from Twitter users is encouraging given the typically toxic environment. But remember, a one-sided argument is ultimately just a person shouting at the air in front of them.

This has been a time trial, not a race.