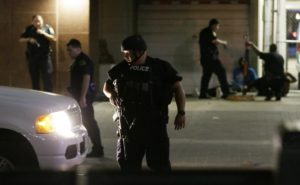 Last night my girlfriend and I sat on the couch watching Mr. Robot. I thought I heard a faint popping noise that I assumed came from Independence Day holdovers. We live three miles from downtown Dallas. About ten minutes later, I checked the group message I share with high school friends. One of them had said “I wouldn’t go outside if I were you, Neely.” I didn’t understand what that meant. I checked Twitter and the rest of my night got sucked into a wormhole.

It’s unmistakable, the feeling of watching a crisis unfold online. It starts with a kernel. You begin connecting dots and speculating in your head while you pan for more information. Even with a lightning-fast news source like Twitter, it takes time to figure out what’s happening. A clearer picture starts to cut through the chaos. Then that picture homogenizes. The videos and personal accounts are sieved until a few pieces of information remain. They’re then rapidly circulated by the cruise ships full of people that begin to arrive online. Eventually, a trend search becomes useless because everyone is recycling the same information again and again.

There had been a protest downtown. Someone(s) shot police officers. That was all we knew right away.

After 25 minutes on Twitter and Reddit, we turned on our cable box — which I had cancelled, effective today — to watch the local news. Multiple reporters had stationed themselves on the fringe of the fray downtown. Observations and eyewitnesses added some context, but chaos was the prevailing character.

I talked with my parents, and my girlfriend talked with hers. My mom hadn’t seen any news that night because she had been at a meeting.

On Facebook, I watched people begin to mark themselves as “safe” during “Violent Crime in Downtown Dallas.” I thought that title seemed strange at the time. It’s actually good reporting. We feel compelled to label every crisis as it happens. We have to know the motivations behind horrific actions in order to rationalize them. “Person X believes Y, so — as disgusting as Z is — it makes sense that they would do Z.”

Rationalizing terrorism normalizes terrorism. Labels politicize these atrocities, but I’m not making a political statement. Do you feel disoriented, afraid, angry, and/or sad in the wake of last night’s events? Then it was terrorism.

In a way, those first twenty minutes of a Twitter trend are a cleaner form of reporting than we often get from professional news sources. It’s just data pouring in from an almost-random sample of people. It hasn’t yet been hewn into statistics to serve a cause. It’s also a faster form of news. It has become the way you download in a time of crisis.

Five years ago, if something happened, I turned on CNN. Now I use a microblog and local news coverage. I went to the Atlanta-based news giant’s website this morning. I saw the headline regarding a body count from last night. Five officers dead. There was also a red, clickable box next to it that said “WATCH CNN.”

The last year has felt more crisis-laden than any year before in my life. Social media are where you learn about a crisis, and where you’ll see it chopped and sold for parts.

It doesn’t feel bad. It feels normal. And that feels bad.