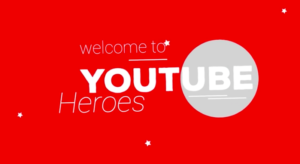 YouTube recently made the move to get more social.

Under the still-in-Beta “community” tab, content creators (the artist inside me just shuddered) will have the ability to post text, images, GIFs, all the usual social tropes. Users can like and comment on the items in this stream, giving them a way to connect with the channel operators they most enjoy.

Sarah Perez points out that this is Google’s latest attempt to rejigger its social presence. (Any Google+ users in the house?) Social media is snatching up Internet ground like it’s post-WWII Eastern Europe. But is it necessarily a positive that YouTube is becoming more social? More social features theoretically mean more engagement, which means more advertising — so yes, as a business decision it makes sense.

But have you been to the Internet?

Anyone who has ever read a YouTube comment section (Why? Why do I still do this?) knows that the conversation taking place isn’t the most sophisticated. There’s some straight up vitriol below almost every video. The anonymous nature of YouTube profiles (and the comment scoring system, as pointed out on Reddit) allows people to write recklessly. Hate speech and name calling is a common site. No one has to own their words. Comments sections are not friendly places.

Of course, Google knows this (Google knows everything). It’s got a plan to counteract the comment section roustabouts. YouTube Heroes is a volunteer program that allows you to take justice into your own hands. It’s like becoming a weekend sheriff’s deputy. An account grants you the ability to flag inappropriate content, add captions and subtitles to videos, and contribute to help forums (Yipee!). There’s no indication that you get a cool t-shirt or anything, but still, what an opportunity!

As Philip DeFranco points out on Twitter, this may be a good pilot program for the “if everyone had a gun we’d all be safer” theory.

YouTube Heroes will have access to mass flagging tools, possibly creating a more-heavily policed environment. This new program may help clean up flagrant or disgusting comments on videos, but it’s also impossible to envision a scenario where none of the Heroes experience some sort of power trip — flagging undeserving video victims.

I referenced a Reddit article earlier in this post. In it, the reader asks why two sites (Reddit and YouTube), each which grant users relative anonymity, generate vastly different comment section experiences. The Reddit users’ response (I realize the potential bias): Reddit’s default display ranks comments based on the number of upvotes they receive. On the other hand, YouTube’s “top comments” display ranks comments based on a variety of factors, including the number of likes they receive, the recency, and the conversations they generate. So, if an inflammatory comment sparks a string of responses that attempt to shoot down the original idea, it may actually bolster the mean-spirited comment’s rank. It’s like using an offensive hashtag in your post about how offensive the hashtag is. Ahem.

YouTube’s commenting system is much better than it used to be. At least people can’t just spam posts anymore. I’m doubtful however, that YouTube Heroes presents the sort of sweeping, Harvey-Dent-in-Dark-Knight changes that it boasts. We might be looking at more of a “Homer the Vigilante” situation.