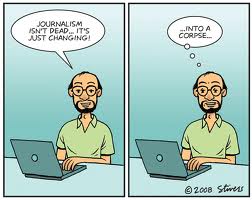 As a senior in highschool, I wrote a paper on how journalism was changing. In late 2009 the Ipad was going to replace the print newspaper. Print journalism has declined, though its integrity persists. Daily circulation has fallen 7% from last year due to a 9% dip in print circulation.

Social media news consumption, conversely, continues to rise. Facebook in particular has become a popular outlet. Statistics from a Pew Research study show that 67% of adults use Facebook and 66% of Facebook users get news from the site. Thus, 44% of adults get news from Facebook. That’s reach.

The 2016 election (or perhaps more accurately the 2015-2016 election) brought many topics to the forefront. Perhaps the only universally accepted attribute of the campaign is that it was divisive. (Disagreeing with that statement actually makes it more true.)

In a democracy, the exchange of ideas and accessibility to credible information is vital. As we receive more and more of our news from social media, it’s important that users have some assurance that the news is accurate.

Facebook and Google haven taken heat in the wake of the election for not doing enough to reduce the circulation of false news articles on their respective sites. Three days ago, both companies announced they would make policy changes to bar fake news stories from using their advertising services. However, this does not mean that stories appearing in the Facebook trend sidebar are guaranteed to be legitimate.

Facebook uses an intelligent algorithm to curate its trending news. This machine learning detection was designed to reduce the clickbait that had all but overwhelmed the site’s news section. It dropped its human curation team earlier this year after allegations that the team was suppressing right wing news stories. It’s unclear what the company plans to do about its news curation moving forward.

Journalistic integrity has been the lifeblood of print media. It’s, in part, why the industry has declined. Newspapers are not run like a business to the degree that social media companies are.

Social networks seek to make a profit. They’re engineered to increase monthly users and the amount of time you spend on the site. A lot of social media platforms are fun too. Keeping up with out-of-state friends and family is easier than it’s ever been.

However, social media platforms have evolved into something more than just a stream of photos and jokes. They’re channels for the dissemination of information. And before you dismiss the conversations that happen on these sites, another Pew study found that “20% of social media users say they’ve modified their stance on a social or political issue because of material they saw on social media.”

Stories can spread quickly. Whether these sites intended to become news bastions or not is irrelevant. The responsibility for journalistic integrity is now incumbent.